A Canadian law quietly enacted in 2013 specifically bans people from wearing any sort of mask or face covering during an “unlawful assembly”.

Under current Canadian law, a maximum ten-year sentence is being threatened against anyone convicted of concealment of one’s face. This law includes protesters despite earlier promises by Canadian politicians and law enforcement officials that the new law would not be used to target law abiding citizens or protestors. This does not only apply to the now-iconic Anonymous Guy Fawkes mask, but includes those who would wrap their face in a scarf or “neck sock,” or even religious face coverings. While Canadian law had already enacted a ban on covering one’s face during a criminal act, this newer law is said to be aimed directly at activists who wear masks at protests. In Oklahoma, lawmakers are planning to introduce a similar bill.

Masks are used for protection, and  in sports, hunting, feasts, and war. They can be used as sacred, practical, or playful things. Masks play a key part within world theatre traditions, particularly non-western theatre forms. They also continue to be a vital force within contemporary theatre, and their usage takes a variety of forms. Masks can also be used to hide behind.

Masks weren’t originally meant to conceal. From their beginning in ancient times, they were used for protection or ornamentation. It is believed that masks were used first to transfer supernatural power or call up “the gods”.

Masks were used in ancient Roman festivals to signal that the necessity for polite behavior was not necessary and people were free for a short period of time to engage in “merry-making” beyond their rank or status. At the Carnival of Venice, which dates back to 1268 AD, all are equal behind their masks. -Even the Jewish Purim festivities make use of carnivalesque masks.

Whatever their use, masks have played an important part history and in helping us to understand what it means to be human by masquerading as something other than ourselves. The masquerade motif even appears in the Bible as an attempt to fool people and an attempt to fool God.  Judaic ritual forbids the “fashioning [of] a statue or a mask”, as marked by the Second Commandment. 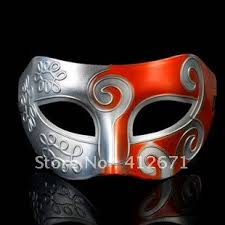 This spring, Mainly Greene, a partnership of four Greene County, New York based non-profits, will explore the masquerade motif in a joint exhibit, “American Masquerade.” Using as its core, the Anti-Rent War of New York State, 1839-1845 The so-called “war” was actually a tenants’ revolt in upstate New York during the early 19th century, beginning in 1839 with the death of wealthy landlord, Stephen Van Rensselaer III.